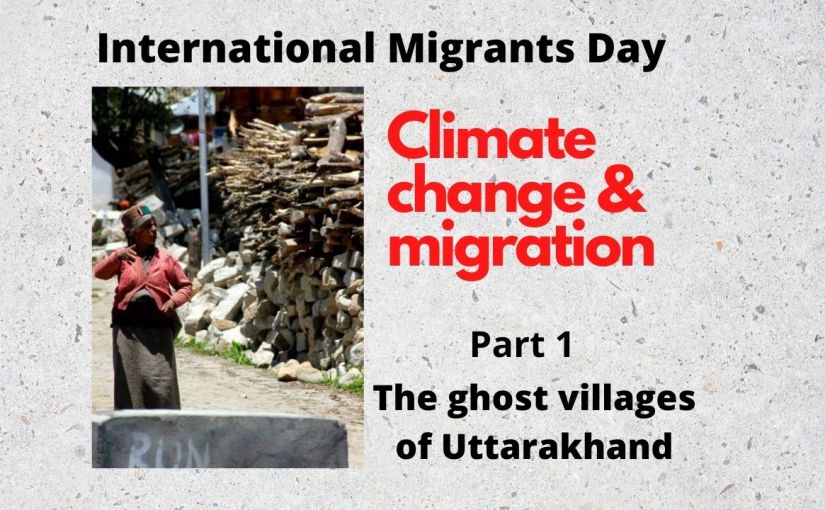 People move their place of habitation because of social, political, or economic reasons. Often, natural disasters lead to sudden displacement of people. However, over the past few decades, large-scale human migration has been happening because of climate change. In India, a rise in extreme weather events like droughts, floods, heatwaves, and hailstorms is fuelling climate migration and it’s the poor who are forced to abandon their homes, land, and livelihoods. The Global Climate Risk Index 2021 puts India among the top 10 countries most affected by climate change. Today, on International Migrants Day, we kick-start a three-part series that will look at various aspects of climate change migration in the country. In the first part, we take you to Uttarakhand, home to several ghost villages, to understand why people, especially farmers, here have been migrating.

In the Himalayas, about 10,000 glaciers are receding at a rate of 100 to 200 feet per decade as global temperatures rise. The glaciers in Uttarakhand are very sensitive and susceptible to climate change. Supra-glacial lakes are formed on the surface of glaciers when the snow melts, and the state has 809 such lakes. The Geological Survey of India has found 13 of the 486 glacial lakes in the state to be vulnerable. A glacial lake can breach and cause floods like the one in Chamoli due to avalanche or cloudburst, a major quake, or other geological factors.

More than 70 people lost their lives in the Chamoli flash flood tragedy and later the government declared 136 persons who were reported to be missing as “presumed dead” so that the affected families could get early compensation. The year 2021 has turned out to be the second-worst in terms of loss of lives in such calamities after 2013 when the Kedarnath flash floods had taken thousands of lives. According to data with the State Operation Emergency Center (SEOC), nearly 300 people died, 66 were reported missing and over 100 people sustained injuries in weather-related calamities this year that include events like flash floods, cloudbursts, avalanches, landslides, and mudflows.

The report identifies three main areas of action for policymakers — preparing for demographic changes resulting from migration, creating alternate livelihood options in the hill districts to revitalize the economy and revisiting the state’s climate change action plan as well as the state’s agricultural policies in the wake of out-migration from hill districts.

Migration and the ghost villages of Uttarakhand

The state has 6,338 village panchayats and 16,500 villages. However, it’s common to find abandoned villages where no one lives. These villages are known as ghost villages. All one can find here are locked doors and hints of civilization that once existed. The eerie silence makes you wonder what must have led to families leaving lock, stock, and barrel, never to return.

As per the data revealed in 2018 by the Rural Development and Migration Commission set up by the state, the hill state has around 700 ghost villages and more than 3.83 lakh people have left their homes between 2007 and 2017. Most of the migration to the plains in Uttarakhand is of young people. The data shows that 29% are 25 or younger, 42% are between 26 and 35 and 29% are over 35 years.

A Right to Information (RTI) query filed by Hemant Gaunia, an activist based in the Nainital district, revealed in January this year that a total of 1.18 lakh people have migrated out of Uttarakhand permanently, while 3.83 lakh have migrated in search of work and better life but keep visiting their native places in the hills. It also mentions that people living in 3,946 villages have migrated ‘permanently’ which implies that these villages also fit the definition of ghost villages.

These ghost villages can be commonly seen in the Pauri Garhwal district where 186 out of 298 villages have been totally or partially depopulated. For instance, Thalda village in the district once had around 52 houses and a population of 175. However, today, less than 30 families remain in the village and the population has shrunk to lower than 100. There are many villages where the population ranges from eight to 10, and in some places only two-three people are residing.

“I have been to some of these ghost villages. In most villages, all the families have migrated, never to return. In some villages, you can find 3-4 elderly people. It’s common to see locked houses, collapsing structures and farms full of weeds and shrubs,” said Robin Chauhan, a journalist based in Uttarakhand.

He added: “There are many reasons why people here have been migrating. The primary reasons are unemployment, lack of medical facilities and lack of schools and educational institutions. Some people returned during the lockdown, but a majority have gone back. Life is tough on the hills. People don’t want the next generation to suffer. They migrate so that their children have more avenues of earning money. The farmers, however, have been gradually migrating because of things that are beyond their control. Erratic rainfall, drying water bodies and lack of irrigation facilities have turned the land barren at an unprecedented rate.”

“It’s for everyone to see that the climate is changing, and the Himalayas are melting. However, it’s the farmers who are getting impacted and are forced to migrate. If steps are not taken today to stop this large-scale migration, that day is not far when the government will have to give money to farmers to stay back and do farming,” said Aanand Mani, a farmer based in Bhimtal, a town in the Nainital district of Uttarakhand. It is situated at an altitude of 1,370 meters above sea level. “My farm is in the foothill, yet it gets difficult. The farmers living in the hills have mountain-sized problems,” he added.

The PIK-TERI study mentions that climate change in the state will increasingly force farmers to abandon farming at high altitudes and move to the plains over the next 30 years. The state government’s action plan on climate change identified three ways climate change may impact agriculture — increased water stress, increased risk of floods and changes in crop yields. Other factors include changed crop season, shifting cultivation zones for certain crops, and drying up of perennial streams.

“The monsoon pattern has changed for sure. It rained so much in February this year. I have not seen so much rain in February in the past 15-20 years. Yes, our agriculture is monsoon fed, but so much rain damaged our rajma (kidney beans), tamatar (tomato), pahadi kheera (cucumber) and mooli (raddish) crop. We used to cultivate kathal (jackfruit) in March-April. Now, we are cultivating it in October-November,” said Anil Pandey, a farmer based in Nainital district. He has his own farm, but he is also into organic farming and is part of a network of 1,200 farmers who have switched to organic farming as it is economically more feasible.

He added: “We are still better placed. Those living in higher altitudes do step farming. Their farms are smaller in size, and the problems manifold. They usually grow potatoes and ginger but could never switch to cash crops. They eat what they grow, so they can’t rely on their farms for a living, and there is nothing else to do on the hills. Water scarcity is a big problem. The spring-fed rivers are drying because trees are being cut to make dams and roads. These rivers used to be a source of irrigation. Rainfall is not sufficient anymore, or it rains a lot. The extraction of groundwater through borewells has impacted the water table. Constant drilling of mountains for tourism is leading to landslides.”

While the previous generation of farmers is not willing to give up yet for emotional or sentimental reasons, the younger generation has made up their minds. “Ninety-eight per cent youngsters want to go out. Their parents are not stopping them. They have suffered enough. They don’t want their children to touch farming. Can you imagine how disastrous that is?” asked Mani, the Bhimtal-based farmer.

As per Narendra Mehra, a farmer based in Haldwani, both central and state governments have launched various schemes for irrigation and are taking steps to contain migration, but the results are not visible. “There is so much corruption that the schemes that look so fancy on paper are not even reaching the beneficiaries. The officials distribute seeds very randomly. They themselves don’t know the crops and their production patterns. Wild boars and monkeys destroy our entire produce. The problems that I am listing are not even related to climate change. The government and the farmers have no control over the climate. But why can’t we focus on manmade problems and find solutions? What about compensation? The October rains ruined paddy worth Rs 100 crore in Udham Singh Nagar district. Last I heard a committee was formed to evaluate losses so that compensation could be given. If you are asking me if the government is taking any concrete steps to stop migration, the answer is no,” he said.

What farmer Mani from Bhimtal said about his brother shows how the problem of migration is altering the social fabric of the state. “My brother is 36. We have not been able to find a girl for him. Likewise, there are many youngsters in the state who are facing similar problems. They are earning well but marriage is still an issue. People from the hills who migrate elsewhere, work in hotels and earn Rs 2,000-3,000 and are all settled. That is the unfortunate truth. This could become a big problem in the state in the coming years,” said Mani.

Also read: Ladakh is sitting on a ticking time bomb.

We do hope that you enjoy reading our stories. We are a very small team of two; with no funding or resources to back us, and your contributions will help us in keeping this platform free and accessible for everyone. If you wish to contribute, click here.

6 thoughts on “The ghost villages of Uttarakhand”